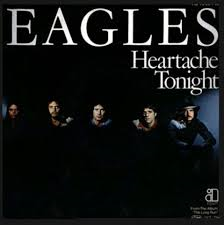 I know The Eagles have their fans, but I just don’t get it. I’ve never found their writing, their guitar-work, or their singing to be anything special. They’re not exactly bad, they’re just, well… safe. Bland.  Safe and bland are, by definition, not interesting.

Anyway, “Heartache Tonight” is the kind of song I was afraid “Train, Train” would be:  rambling, overpolished, clean, and, at four and a half minutes, twice as long as it need to be to get whatever message it’s trying to communicate communicated.  “Heartache Tonight” is the musical equivalent of that guy who gets a little too extroverted when he’s had a few drinks, lumbering around the bar, greeting everyone with a smile and a high-five, and then leaving with an ambiguously menacing comment like, “This night is gonna last forever!” or “We can leave it in the parking lot!” or “Lord, I know!” in response to nothing in particular.  He spills beer everywhere, and when you ask the bartender how many beers he’s had, he says, “Only two, man!” and you know that’s right, because, just like Glenn Frey’s vocals, he sounds too clean, crisp, and together for him to actually be lost in the music, or the night, or his drinks, or whatever.  Boring?  Bland?  Who am I kidding?  This song is insincere, pretending to be having more fun than it is.

One thought on “Everybody wants to touch somebody”