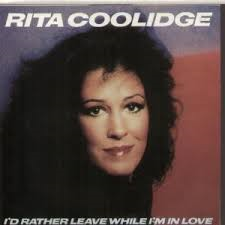 It’s another namby-pamby easy-listening dirge cum ballad, this time, Rita Coolidge’s limp “I’d Rather Leave While I’m in Love“, which I think to be a particularly awful example of the genre.  With mixed metaphors (roses dying on vines, never mind that they grow on bushes), triumphal chords at the least triumphal part of the song (“you and I!  Can’t say good-bye!”), and a generally somnolent approach to music in general, this is the sort of thing Allstate would use as hold music in the hope that you fall asleep before they can connect you to the complaints department.  The worst part of the whole package is the drippy sentimental tone with which it handles noncommittal responsibility.  I don’t mind a song about someone who cops out on relationships because he or she is afraid of getting hurt.  I do mind them when they try to sentimentalize such people instead of presenting them as cads.  Or cowards.  The less said about this song the better; I’m offended, and I think most people would be too if this song weren’t the audio equivalent of cream soda.